JLDG is a data-grid infrastructure for Lattice QCD (LQCD) community in Japan. Several large LQCD collaborations in Japan have been working on QCD simulations using super-computers. Outputs of simulations called "QCD configurations" are valuable, because physicists can study various aspects of QCD using these configurations. JLDG enables the community to share configurations distributed over distant sites. File sharing is realized with GFarm global file system. GSI authentication is managed by VOMS. JLDG utilizes the HEPnet-J/sc private network as a hardware infrastructure. Part of configurations can be accessed from all over the world through the ILDG interface. 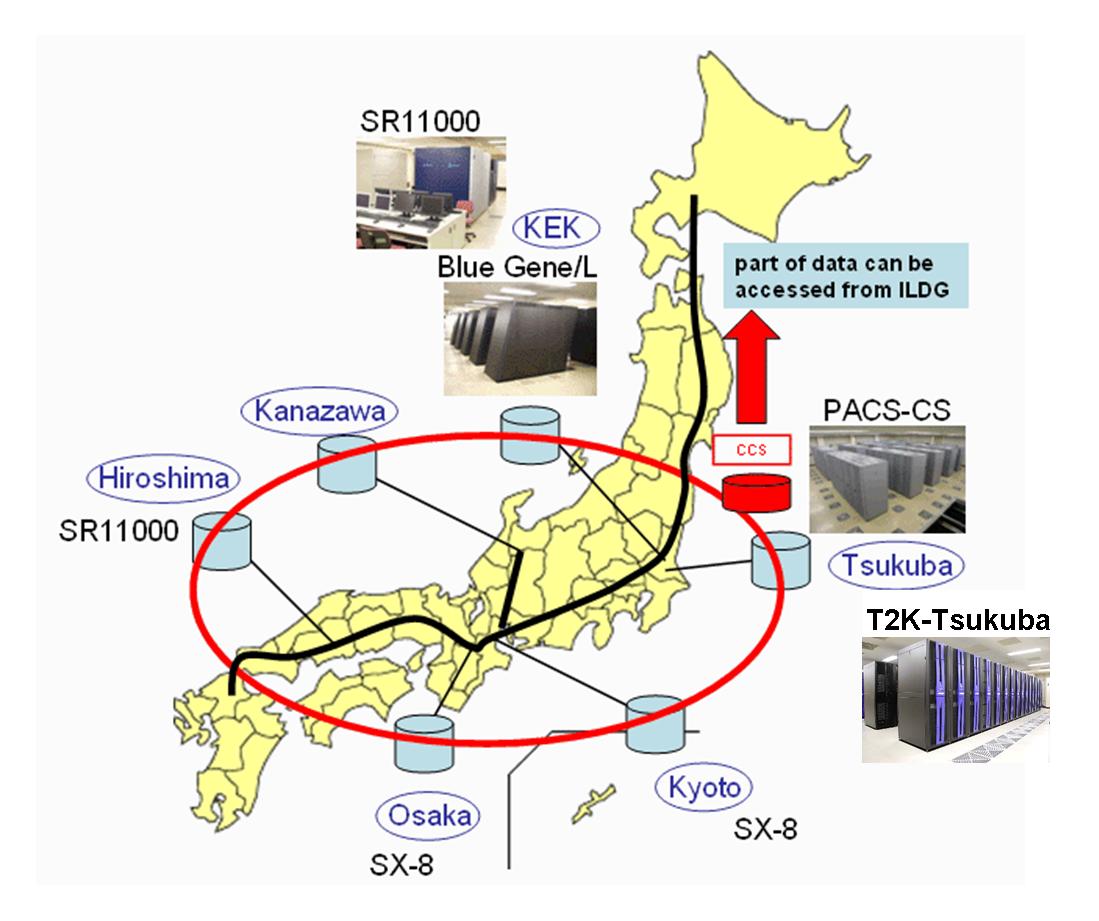 ILDG is an international project to develop a grid of datagrids for sharing lattice QCD configurations world-wide. Design of QCD configuration markup language QCDml was finished in 2004. WSDL definition of interface among collaborating grids was also completed recently. Construction of regional grids is finalized in US, UK, Germany, Australia and Japan. (JLDG works as the ILDG Japan grid.) Inter-operation of these local grids started in July 2007.

QCDml Faceted Naviation system is a new JLDG portal which supports narrowing search of QCD ensembles archived in ILDG. Facets are categories of QCDml ensemble documents, such as names of regional grid, collaboration, project etc., and physics parameters. You will be able to specify any items in any order for narrowing candidates.

LQA was a database of QCD configurations provided and maintained by the center for Computational Sciences (CCS) since Dec.2003. The LQA was designed to serve as a Japan gateway to/from the other sites of ILDG. The system was restructured as a gateway between JLDG and ILDG in June 2008. One can now access public data in JLDG using the ILDG standard interface and commands. JLDG users can access data using the JLDG interface.

HEPnet-J/sc is a Japanese domestic network for theoretical high energy physics. It utilizes SuperSINET 1Gbps private network connections operated by NII. Major LQCD sites in Japan are connected. HEPnet-J/sc started as a collection of NAS storages and a file mirroring system among them for Japanese Lattice QCD collaborations distributed over 6 sites. Storages connected to the HEPnet-J/sc amount to 60TB. The HEPnet-J/sc will be dissolved and absorbed into JLDG.